From the Pioneer Corps to the Medical Corps

My father had read for his degree in mathematics and natural sciences at the university of Breslau in the 1930s. After the war he found it impossible to obtain a research post in England. In part, he said that none of the companies recognised his degree, nor had they heard of his university, which disgusted him, as he said that it was older than Oxford and Cambridge – a ‘Little Englander’ mind set, he believed. During the War, however, his university qualifications gave Werner some advantage. He did not have to sit the Intermediate Examination but was able to proceed directly to the BSc General in Pure Mathematics, Applied Mathematics and Physics. His friend and one-time colleague from Germany, Hermann Weil, wryly notes in a letter that he assumes this examination wouldn’t be especially onerous for Werner, given his past experience. However, he did have to sit the examination before proceeding to medical training, which I gather he found frustrating.

Note: When I contacted the archivists for the records of the University of Breslau (now Wrocław) in 2015, they had nothing about my father’s attendance there – not even a name on a list, which will not have helped in his post-war job applications, presumably. In further correspondence, it transpired that we have more documentation from that time than the university has; most documents were destroyed.

Many years later, after the war, Werner said that members of the British Army had rifled through the refugees’ possessions that had had to be left in storage at Kitchener Camp in Kent. Many items were stolen. The following documents substantiate this.

The document has the date December 1942 at the bottom righthand side of the page, but as the paper is over A4 size, my scanner can’t capture the date. 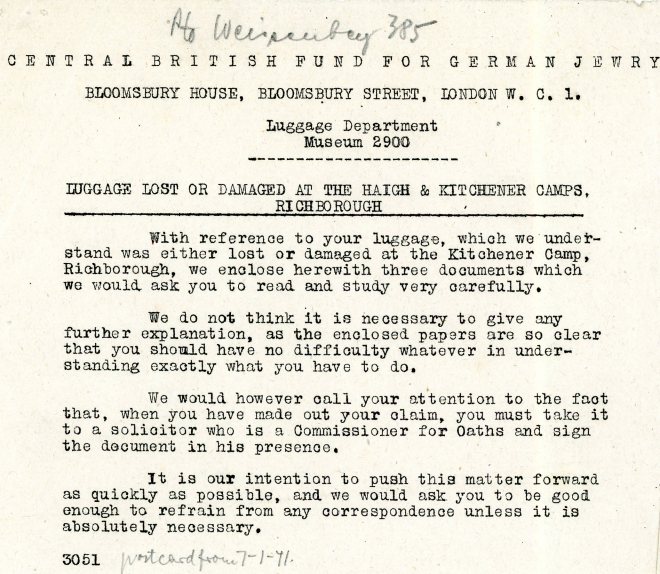